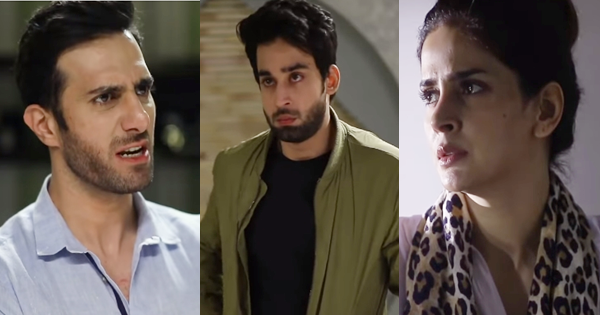 The latest nail-biting episode of Cheekh was quite an intense and a startling one, right from the first scene till the very end. Big Bang Entertainment’s execution of this marvelous production deserves appreciation, since the intensity of the compelling drama was never compromised. Here the story has taken a new turn when we see the rivals are finding new way to harass their opponents in a game of low ethics. As per tradition of Cheekh, this episode also comes with a shocking twist and some jaw dropping moments.

At the beginning of the episode we see a tactic played presumably by Wajih, to scare Mannat and her innocent mother. A parcel with a burnt scarf is put at her door as a warning. Following this with his reckless terror tactics, he sends some thugs to wreck her house, to terrify her. Seeing her house in a complete mess, Mannat rushes to the police station to file a report and as we all anticipated, the police officer gets called off as soon as he started the investigation against Wajih. The whole world seems to be working on Wajih’s orders. We must admit, as annoying as he is, he’s pretty resourceful. Ever since he has gotten into the case, he has been walking out of every situation strategically, leaving Mannat helpless. But to his surprise she has more courage than Wajih’s expectations.

The most interesting secret is revealed in this episode about Yawar and Shehwar’s strange marital relationship. Since they had no child, Yawar always kept Shehwar in the shadow of an image that she was unable to conceive. But the truth has been revealed in the episode now – it was in fact Yawar who could never become a father. To satisfy his dignity, he had shown fake reports to prove him medically fit. The tension begins when Shehwar decides to go for another checkup. He makes her regret this decision by forcing her to believe that her condition couldn’t be cured, making her promise never to even try for any other doctor again. As devastating as the situation is for Shehwar, Yawar is also restless because he knows he is doing wrong just to save his pride against his wife.

Meanwhile Shayan appears in the most satisfying manner. He looks at Yawar and Wajih’s faces, picks their tea cups and throws them on the floor to make a mess. This is of course a very little example, to remind them of what they did to Mannat’s house. With a very smooth facial expression, Shayan warns Wajih to stop attacking from behind and confront him without his nasty tricks for Mannat. As expected, Wajih isn’t alarmed at Shayan’s warning; instead he shows a thumbs up to agree that he will definitely confront him the next time. When this scene ends, the most suitable word for his brother escapes his mouth, “Jaanwar”.

Finally, as the court hearing of their case approaches, Shayan convinces Mannat to hire a lawyer. They reach the court with great confidence and that special glance towards Mannat’s face seems to bother Wajih to the core.

Overall the episode is progressive and revealing to some extent. The mean tricks and games played by the two brothers who think the whole world is beneath them keep you on edge. Saba Qamar, Ejaz Aslam and Bilal Abbas Khan are performing their characters with extreme intensity and the direction undoubtedly deserves applause! Please share your thoughts in the comments about this episode of Cheekh.