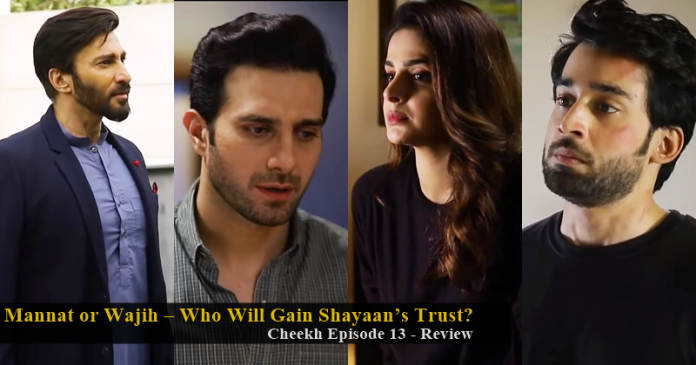 Big Bang Entertainment’s Cheekh has become one of the most watched and anticipated dramas on ARY Digital entertainment channel this season. Fahad Mustafa and Dr. Ali Kazmi are proving to be an incredible producer duo and to have Badar Mehmood as the director; Cheekh has resulted in a very successful outcome.
Cheekh revolves around two main lead roles, Saba Qamar as Mannat and Bilal Abbas as Wajih. The constant conflict between the two is what keeps us on our toes throughout each episode!
Shayaan’s struggle to separate the right from wrong

Mannat, who has continually been maligned by Wajih and Yawar, being accused of having a bad character, still manages to earn Shayaan’s trust, even though he is being pushed to throw her out.
However, when he finally reaches his breaking point, he demands Mannat to swear on his head and speak the truth. Mannat immediately does what is asked of her, and confidently repeats her statement, that Wajih has killed Nayab and has harassed her.
It’s true when they say blood relations are very hard to break and we see this clearly in the episode. Shayaan is losing his mind, trying to believe what Mannat reveals to him, yet he cannot come to terms with Wajih as a criminal.
Yawar’s Wife, Shehwar Accidentally Witnesses Wajih in his True Element
This particular one was the most brilliant and nicely executed scenes of the episode, where Wajih harasses Mannat in the kitchen and Shehwar listens in on their conversation, as she stands outside.
When she hears Wajih threatening to break Mannat’s bones, just the way he did with Nayab, Shehwar drops the tea cup she had been holding, out of shock. Wajih is stunned to see Shehwar and tries to make up an excuse, but we all know, Shehwar is not that easy to fool.
Her confrontation with Yawar was also pretty epic to watch, but in later scenes we sadly see her shut her mouth to keep herself safe from the matter.
Will Mannat’s Increasing Problems Make Her Stronger?
A late night phone call from the police is such a stereotypical way of scaring away the witnesses. Mannat is called up by Inspector Abid for the purpose of some investigation and Shayaan lets her go alone, as she has put herself in the mess.
Mannat and Ramazan Chacha are made to wait for the inspector at the police station late at night, while he turns up hours later and then fakes emergency, it is quite evident that this is a planned strategy devised by Yawar and the inspector to make Mannat and Ramazan chacha get tired of their constant struggle and take back the case.
One final stroke to make things worse: Asad’s phone call on Mannat’s phone late at night, which Shayaan sees and wonders if Wajih has been right all along.

Ranveer Singh starrer film drops another bomb on the multitude of...

Twitter brimming with #saynotowar trends across the borders along with #gobackmodi...