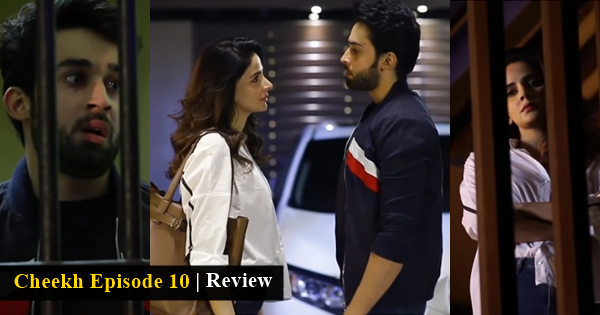 Cheekh is a drama that has been going strong since it went on air and the latest episode was another brilliant one with a major twist. Finally, the main phase of the story has begun and we are looking forward to how things will move henceforth. Until now, Mannat had stayed quiet and was refraining from taking any step against her family even though she knew who was the one who killed Nayab, but in this episode we saw her filing an FIR against Wajih.

The episode opened with Mannat leaving for US and on her way to airport, she decides to pay a visit to Nayab’s family. However, when she reaches there, she finds out that police raided Nayab’s home and took her father Ramzan to the police station. Shamsa, Nayab’s mother, accuses her of the injustices done to her family by Mannat’s in-laws. She also questions Mannat about why she was acting innocent about the police raid and about them abducting Ramzan. All this pushes Mannat to reconsider her decision of going abroad. She is shaken by what was happening to Nayab’s family. She decides that she shouldn’t run away from the truth and Nayab and it was time to take a bold step.

Mannat, hence, instead of going to the airport, goes to the police station to file an FIR against Wajih and to talk to the police to release Ramzan from their custody. The expression on Mannat’s face showed how relieved she was after taking such a decision and as the episode progressed, she also talked to herself about how she now has to stand firm on her ground.

On the other hand, while Wajih was happy as she was leaving, he was shocked and surprised to see her back. Yawar also finds out about what Mannat had done. Meanwhile, the police show up at their place with an arrest warrant against Wajih and take him into their custody. Yawar, who is too conscious about his reputation, contacts a lawyer to do everything to help him take Wajih out even though he knows Wajih is a murderer. On the other hand, Wajih is really angry in the lock-up and have made up his mind to give Mannat a lesson as soon as he gets out of jail.

Mannat has taken a courageous step by going against her family and she knows she will get a lot of pressure to withdraw the FIR. She knows that it is going to be a long journey and this was just the beginning. Saba Qamar’s acting and expressions in the episode were totally superb and depicted the determination and confidence that Mannat has. The determination in her eyes and face expressions after Wajih’s arrest were distressing for Yawar and Saba Qamar nailed them perfectly. Bilal Abbas Khan has also given an amazing performance as Wajih too where he looks sweet and innocent but has evil intentions and is cruel to the core.

The direction, story, editing, and acting are all brilliant in this drama which makes it a treat to watch and leaves you wanting for more after every episode. Let’s see how things unfold in the next episode on Saturday at 8.00 PM on ARY Digital.