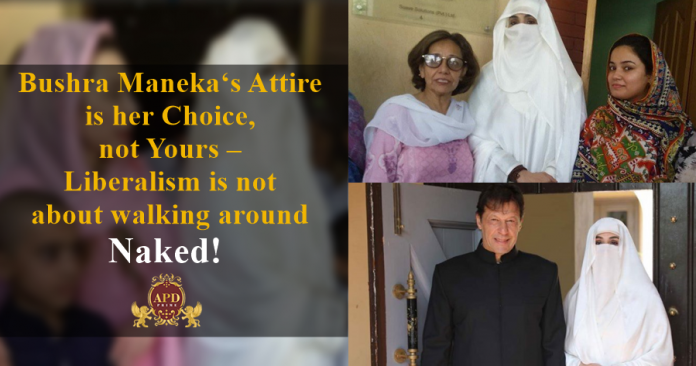 If someone is a Liberal with rather twisted ideas on women and their clothes, they need a wake-up call. Feminism or liberalism is not about bashing one another. Since day one, Bushra Maneka’s attire has been in flaming debate and it is perhaps understandable: A lot of people might be rather frustrated on Not seeing the first Lady’s face and therefore have nothing to talk about.

And also there are some very interesting people who say they have a right to criticize a public figure like Bushra Maneka, but they need an urgent realization that Bushra Maneka is not a PUBLIC figure, she is the wife of one!

And to be honest, even if people would see her without Burka, they would still complain on how her eyes looked different or her skin color wasn’t fair or what brand she was not wearing. The matter is not the attire but rather the need to criticize everything and anyone. Whether someone’s branded clothes or Maneka’s simple White Burka, And it calls to rectify what’s deep inside us.

With bans on Burqa in Denmark and consistently Muslim women being targeted and bullied to choose burqa and Hijab, as well as the issue of cartoons, does it not ring someone’s bell? And to make the matters worse, it is now the very ‘Muslim’ youth bullying.

On one extreme we see blatant outcry of some people pointing fingers at actresses and models. On the other, the same people supporting ‘personal choice’ would hypocritically oppose the attire of a covered woman.

Well, it tells us one thing: You cannot be completely liberal. Liberalism is not about taking off your clothes. It has to be with the mentality and how you perceive something. If you are a true liberal, Bushra Maneka or any other man or woman who chooses to be herself shouldn’t bother you. In fact, it should not even spark someone’s attention.

But we live in a two faced society, whether western or eastern. It always sparks attention and newspaper tabloids are filled with open satire. Which says, even the greatest liberal is not a liberal- Because as long as it is giving you problems, you are not a liberal- which inadvertently calls for another truth: Liberalism doesn’t exist!

You change yourself for what your heart requires you to do and then to counter your choices, you call yourself a liberal. But when it is about someone else or an idea that threatens your ideas, all your liberalism goes on a vacation!

P.s: Stop saying Bushra Maneka represents you! YOU REPRESENT YOU, grow up and Learn to wash your own dirty laundry!