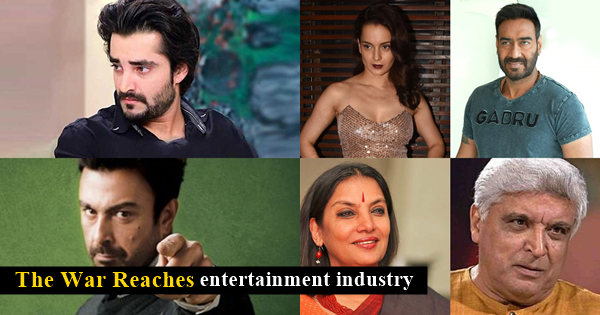 Its no secret that artists from both sides of the border have helped contribute to Pakistan and India’s harmonious relations, through a mutual respect and admiration for art. Art has always been considered the ultimate personification of love, peace and harmony. It has played a pivotal role in bringing nations together through a display of sheer respect for arts and artists alike. However, to say that the tension on the borders didn’t ever find their way into the entertainment industries of both countries, would be far from truth.

Ignoring all the previous examples of India spewing hatred against Pakistan, the most recent one has not only made us angry, but sorrowful too. India has consistently been blaming Pakistan for its unproved involvement in the Pulwama attack which took lives of over 44 Indian soldiers.

While we are all aware of the kind of atrocities Indian soldiers have been posing on Kashmiris over the years and the concept of them having a taste of their own medicine might excite quite a lot of us, we have however chosen to stay humble and mourn the death of Indian soldiers while maintaining that Pakistan had absolutely nothing to do with the Pulwama Attacks.

So where did this cold war begin and how far has it gone till yet? Lets take a look

It all began with the cancellation of Javed Akhtar and Shabana Azmi’s visit of Pakistan, scheduled by the Karachi Arts Council, for a literary event in honor of Kaifi Azmi. While things could have been treated in a different and less hateful manner, Indian celebs had something totally different in mind. Javed Akhtar was quick to start his twitter war through this post:

Kranchi art council had invited. Shabana and me for a two day lit conference about Kaifi Azmi and his poetry . We have cancelled that . In 1965 during the indo Pak war Kaifi saheb had written a poem . “ AUR PHIR KRISHAN NE ARJUN SE KAHA “

This was where Shan Shaahid, the most versatile Pakistani actor intervened and gave a shut-up call to this hate speech.

Actually now is the time to come,and show the friendship and trust you have on us ..it is a fact that Pakistan has nothing to do with it , remember hate wins elections ..we condole the deaths of all the humans who died in this tragedy .. from 1947 till 2019

What seemed like a rather humble and disarming reply to Javed Akhtar’s hate speech, didn’t quite have the intended effect, for the Bollywood actress Kangna Ranautt stepped up into the spot light and well, took things a bit further. In an interview with a local TV channel, she said:

“Pakistan has not only violated our nation’s security but it has also attacked our dignity by openly threatening and humiliating us. We need to take decisive actions or else our silence will be misunderstood for our cowardice,”

She however has yet to figure out what kind of bravery allows a person to dig his own grave! Anyhow, she went on to say:

“Bharat is bleeding today. The killing of our sons is like a dagger in our gut. Anyone who lectures about non-violence and peace at this time should be painted black or put on a donkey and slapped by everyone on the streets.”

Speaking about donkeys, as a Pakistani we have all grown up believing in the abundance of donkeys in Pakistan. Ooops… Looks like India took the lead!

“Right now is the time to focus on decisive actions. Pakistan’s ban is not the focus, Pakistan destruction is.” Kangna Ranautt

#PulwamaTerrorAttack Literally 5 mins after the attack, the entire Indian Media blaming Pakistan for the attack. Wow.. So basically right before a historic visit by MBS with billions of dollars of investment, Pak decided to kill Indian soldiers in Pulwama? Wow… *slow clap*

#PakistanZindabad To the naive Indian masses: Seriously, i feel sorry for u tht ur media has made u believe that u did surgical strike be4 & can attack Pak anytime. I feel sorry tht u r convinced tht its bcz of Pak tht thr is unrest in Kashmr for decades. I hope u will grow up.

#PakistanZindabad We have fought a 17 yr long war against terror & we have seen incidents like APS Peshawar but Allah ka shukkar hai i have never seen Pak media/analysts/politicians act so childishly & stupidly as i see in India. Thori mazeed qaddar aayee hai apnay mulk ki.

There are a few sensible people in India too… Lets stress on the word “FEW”! One example of them is Navjot Singh Sidhu, who has been advocating peace and love between the neighboring countries, ever since Imran Khan took up the PMs seat. In an interview with a local TV channel, Sidhu said:

Don’t quite believe someone had the audacity to say that aloud? Here listen for yourself!

This however wasn’t really taken quite easily by the Indians, whose fire for revenge had blinded them from seeing and listening to reason. As an aftermath of this speech, Sidhu received widespread criticism and was asked to exit from the Kapil Sharma Show.

Looks like India has decided to wage war… Not on a nation, but on the entire concept of art and the respect it deserves. And well, PM Imran Khan’s narrative quite simply sums it all for us:

Pakistan will not think about retaliating if it comes under attack, it will most definitely retaliate

Zubab Rana on the Rise to Stardom with Rishtay Biktay Hain