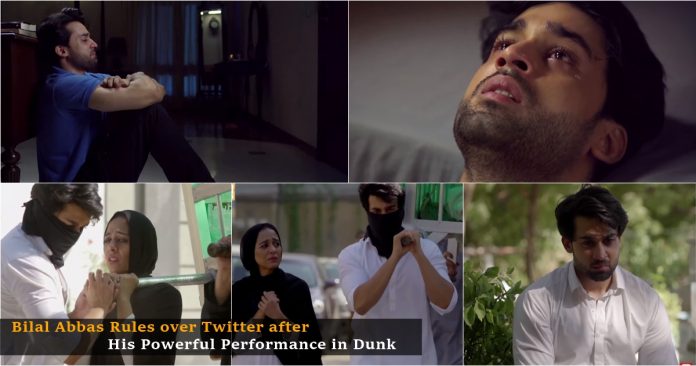 Bilal Abbas Rules over Twitter after His Powerful Performance in Dunk

The young talent who has been ruling our TV screens lately is no other than Bilal Abbas Khan, specially in terms of cuteness and versatility. Having ranked amongst Top 50 Asian celebrities in the world this year, Bilals stars are soaring new heights.

While Bilal Abbas Khan has been acting in dramas for quite a while and for the versatile roles he has portrayed so far, this multifaceted artist remains quite an underrated one. Khan has performed demanding roles that are a factual example of his on-screen acting flair.

He has already become a household name after his unforgettable performance as innocent Abdullah in Pyaar k Sadqay or a typical Karachhiite in Ek Jhooti Love Story last year. After proving his acting prowess in Cheekh, Dunk is another attempt by Bilal to pick up a controversial story with a challenging character.

Dunk is directed by the Cheekh famed director Badar Mahmood, who catches our attention with impressive sequences between past and current events that pass quickly. It’s a crime story where Bilal Abbas can be seen in a lead role with Sana Javed. Dunk is brilliantly penned down by Mohsin Ali Shah and also features an ensemble cast including Shahood Alvi, Fahad Sheikh, Laila Wasti, Saifi Hassan, Salma Hassan, Kanwal Khan, Noman Ejaz, and Azekah Daniel among others. Starring as Haider, Bilal’s character has multiple layers that unfold him as a realistic and honest person with some glimpses of Wajih.

We currently love his character as Haider in Dunk, where Bilal translated every single emotion with enormous precision. Not only did he immerse himself in the character, he outshined others with his delivery of expressive dialogue. Even if the character has negative or optimistic glooms, Bilal has proved that he owns each character as a human chameleon, making every role his own.

Here is how people are gagging over his performance in Dunk on Twitter:

Zayn Malik’s rendition of “Allah Duhayi Hai” is all over the...

Furqan Qureshi at top of his game in Bharas