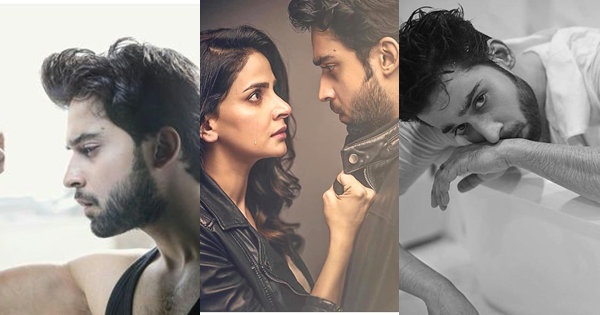 So is it just us or literally everyone still drooling over Bilal Abbas Khan’s acting in ‘CHEEKH’. We all kind of knew it has to be Wajih behind the murder, but couldn’t absorb the forth coming reality of such innocent face turning evil. ‘Saba Qamar’ giving away the ultimate spoiler alert (till now) to reveal the culprit in next episode (ep06) made us wait for an eternity. And when finally it aired, Bilal Abbas Khan, with his wicked screenplay, gave everyone chills down their spine. Take a bow Bilal! 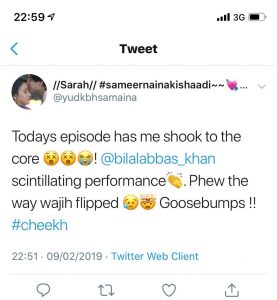 So how did he manage to collect this admiration on such a short note?

Travelling back to his initial days; his embryonic serials ‘Saaya E Dewar Bhi Nahin’ and ‘Dampukht’ neither did shatter any box office records or gave audience goose bumps, but it surely gave away the catch: A STAR IS IN THE MAKING- BILLAL ABBAS KHAN.

From ‘Qasim’, a love-struck, innocent and shy dye-wala in ‘ORangreza’ to ‘Taimoor’ in ‘Balaa’; a protagonist character, portraying polite and mama’s boy behavior, to antagonist persona craving for revenge. He leaves us all awestruck. 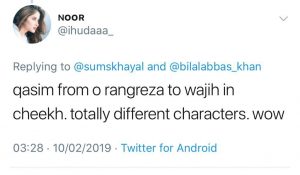 Currently he is playing ‘Wajih’ in ‘CHEEKH’ starring against the diva herself, SABA QAMAR.  Only six episodes have aired yet but it already binds the audience to its core. How easy it is to leave a mark on audience as a villain when you have a drop dead gorgeous actress like Saba against you? Not so much actually. Not even a single actor crosses our mind that could have played ‘Wajih’ better than Bilal Abbas Khan. His expressive eyes, his calm and steady voice along with his pin point dialogue delivery, provide an unmatched package. 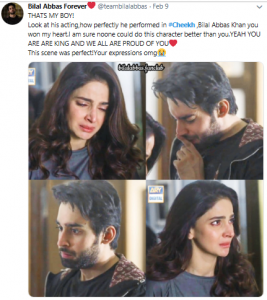 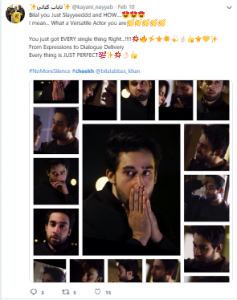 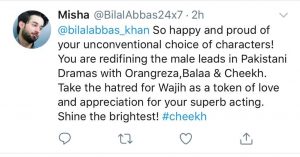 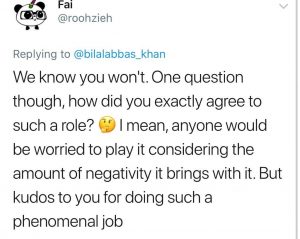 Where does Bilal Abbas Khan stand as an actor?

Every time when a star is born, he has to prove his mettle by carving inborn talent with diversified roles. Be it ShahRukh Khan or Taylor Swift, whenever an artist stop bringing creativity to the table, it fades off.

Not many youngsters in Pakistan Drama industry fare well when rated against Bilal’s attributes as an actor. At an initial level of his career, he has forced us to rank him amongst the very fine actors of our industry with the likes of Ahsan Khan and Mikaal Zulfiqar. Such maturity, much wow!

The ever growing upward graph of Bilal’s reputation as an actor, has forced us to hunt his competition across the border. Hmm… So, 2018 has been marvelous for ‘Ayushman Khurana’. His chocolaty-boy image wrapped up with some on demand hardcore real–life acting in ‘Andhadhun’ and ‘Badhaai Ho’ once again proved that he still has a lot to deliver. Much to our happiness, whenever compared, Pakistani Twitterati force can gladly present Bilal Abbas Khan as a more diversified and proven actor. By the way has Ayushman Khurana ever executed a negative role? OUCH!!! Didn’t mean to hurt

Another newly appraised actor in B-Town is ‘Raj Kumar Rao’, who has tapped variety of roles from ‘Gangs of Wasseypur’ to ‘Newton’ to ‘Stree’ is constantly proving that he is the torchbearer of Bollywood’s young lot. Being said that, he has had a fair share of difficulties to prove himself as a prominent actor; it is still a long way for him to standout. On the contrary, Bilal Abbas Khan is miles ahead in establishing himself as a sought after actor for almost any role, unless it is meant for a female actress though. Simply because “SAADA VEER TO HEERO HAI” *wink**wink*

In an interview, Bilal Abbas Khan has already described Ranveer Singh’s negative character in ‘Padmavat’ as his ‘intrigued one’. We haven’t moved on from ‘BALAA’ yet and already are on a high-dose entertainment with ‘CHEEKH’; never thought a negative character can be so loved. Stop messing with our heads Bilal! It’s a long way to what Ranveer Singh has achieved but yes, Bilal is surely on the right track. 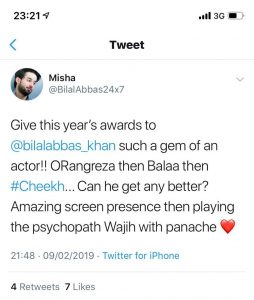 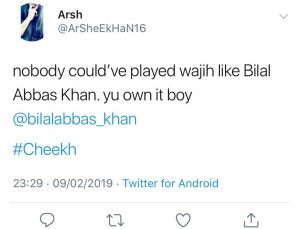 It is easy to settle down in a comfort zone. The challenge is to step out of it and flourish. It is exactly what Bilal Abbas Khan has been doing in his short yet illustrious career. It is still a long way to go to leave a mark in ultimate acting book but we back him up to do so. 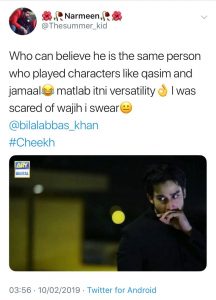 Farhad Humayun – The man who won’t give up!

Cheekh Episode 9 – The Tension and Commotion Is Intensifying Between...