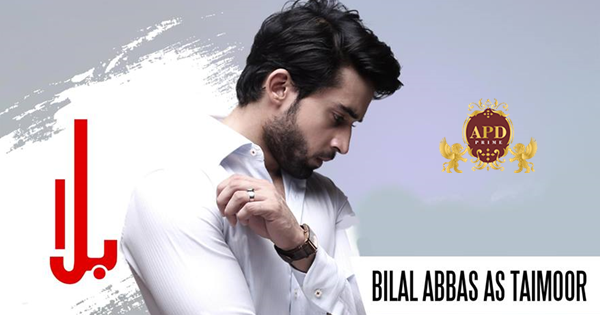 The sunny-side hero, Bilal Abbas Khan, has reappeared unexpectedly in ARY’s latest drama serial Balaa and it sure looks something. For a while, Bilal Abbas seemed to have taken a break from the screen but we hope Balaa will be an amazing comeback!

A story looking more closely to a psychological thriller trotted by jealousy, envy and revenge, the plot whirls around a girl named Nigar, played by Ushna Shah. Appearing to be the antagonist and possibly the ‘balaa’. She is possessive and cunning, ready to snatch anything that she wants.

Nigar has a brother named Junaid played by Asad Saddique who is married to Zeba (Ammara Chaudhary) but the marriage ends in turmoil created by Nigar. She also loathes her father , whom contrarily considers Nigar to be lucky for him as he got rich after she was born. Nigar assumes that her father (Sajid Hassan) loves her brother Junaid more.

On the contrary, Bilal abbas playing ‘Taimoor’ is the protagonist, positive and sweet, and in love with his cousin Sara played by ‘Azekah Daniel’ – whom abandons Taimoor on the day of the wedding. Taking the advantage of this heart-breaking situation, Nigar tries to build a relationship with Taimoor.

All the characters are inter-related by family, Bilal’s mother is played by Samina Peerzada who is loving and supportive towards her children. Another more interesting character, destined to become Junaid’s second wife is played by Mehar Bano.

The show is loaded with suspense and seems to address some very fundamental psychological issues (that are not considered a mental disease). It also speaks for the conceited attitudes of some rich relatives and the basic nature of the powerful who think that they can buy and ruin anything they want. The base is the ultimate victimization and manipulation without any conscience!

Directed by Badar Mehmood and written by Zanjabeel Asim Shah under the production of Big Bang, Balaa will be starting today, with a double episode at 8:00 pm!

Social Media Woos Over the Phenomenal Performance of Ramsha Khan in...