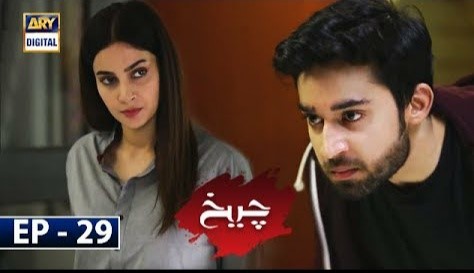 The second last episode of Cheekh has finally given us a much-needed sigh of relief when things have come around to haunt the unbeatable and fearless Wajih Taseer!!

The handsome antagonist of Big Bang Entertainment’s most popular project Cheekh, Bilal Abbas Khan has crossed all boundaries with his villainy, and has played a huge part in making Cheekh a superhit drama serial of the year. The variety displayed by his expressions, revealing multitudes of emotions including arrogance, helplessness, worry, isolation and now fear at the same time shows some phenomenal acting skills and versatility.

Playing the bad guy opposite the gorgeous Saba Qamar as Mannat, Bilal Abbas Khan has time and again proven his acting mettle to us throughout the 29 episodes of Cheekh that we have so far gotten to enjoy. After a harrowing journey of Mannat fighting for justice and bearing incomparable losses in the process, Wajih’s main target Mannat is now turning the tables on him, to finally teach him an eternal lesson. Wajih’s spectacular violent reactions have put life in the drama’s plot and have forced us to stay glued to our TV screens every Saturday night. Penned by Zanjabeel Asim Shah, Cheekh’s story has taken a conclusive turn now and the intensity is at its peak.

Astonishingly Shariq and Haya decide to get married, however the decision becomes a source of torture for Haya’s loving brother Wajih, who initially is made to believe that Shariq has kidnapped Haya and plans to treat her the same way he treated Nayab before killing her. A violent, but worried Wajih wanders around wildly to search for Haya but finally finds her at home with her new husband, Shariq. The entire scene shakes Wajih to the core and we see him all alone at the end, with no support from Haya or Yawar.

Mannat keeps passing a vengeful smile while Wajih is stuck helpless because of his sister’s decision. The smile continues to glow on her face when she manages to lock a terrified Wajih in a dark store room overnight, the way he tortured her mother. Wajih seems to finally be getting a taste of his own medicine. Mannat’s threat, “Main tum se tumhari tarah laroongi” is coming alive!

Her approach to gather evidence against Wajih using police officer Amir Khan was quite impressive thinking on her part as well. Shariq, Mannat and Sadiq the servant, have formed a secret team to make Wajih’s life a living hell.

Overall it’s obvious that Wajih is left all alone to face the consequences of his own brutalities. To find out if Wajih finally gets what he deserves after Mannat’s final play, stay tuned for the next exciting episode of Cheekh.