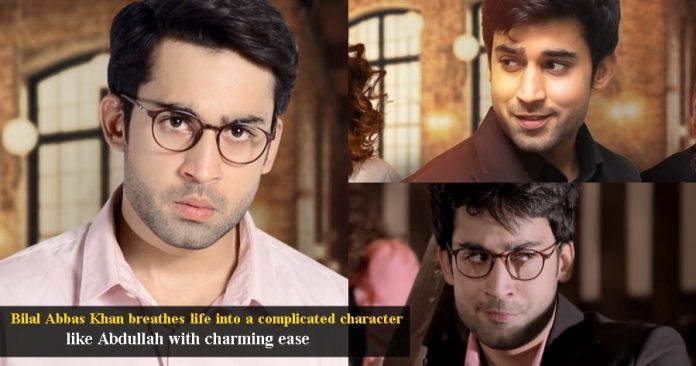 With the buzz around the latest drama ‘Pyar ke Sadqay’ bringing an unconventional love story, the usual suspects behind its success go a little beyond the general script and story. Delving into the psychological impact of mental and physical abuse, the story revolves around a timid & shy Abdullah, who hasn’t been able to live up to his actual potential because of the boundaries around him.

A love-story at the appearance, there is an underlying message and subtle story of a scared boy that is invisible to the naked eye. From Abdullah’s expressions, to how he deals with everything in his life, Bilal Abbas Khan has made the character’s complicated nature and personality outshine in every performance. With so much going on in his life, Abdullah has never had a voice or mind of his own. With the constant mental and physical abuse inflicted upon him by his father, he has turned into a troubled young man. Bilal Abbas Khan imbues the character with earnestness and believability. He adds a sense of chaotic energy with his heartwarming antics the minute he appears in the frame.

What makes this character so unique is how he has progressed so far in the story. You can see from Bilal’s performance that Abdullah is good at heart and has the best interests of people close to him. At the same time, he also lets the people close to him, cloud his own judgment, and make decisions for him. He isn’t indecisive; he is just scared to do what he wants because of the fear of hurting those he cares for. This has created the confusion in his mind over if he wants to marry Shanzay or not because he knows he doesn’t want to leave Mahjabeen. At the same time, his step-father’s words about their unconventional relationship keep piercing his ears.

All in all, the credit to this three-dimensional character goes to the performer, Bilal Abbas. The play surely started as a cute and lovely story, though watching Bilal unfold the nature and complexities behind Abdullah has been a delight to watch. There is sure a lot to come out of this story- and we can’t wait to see how Bilal is going to tackle all the shifts of this unique role.