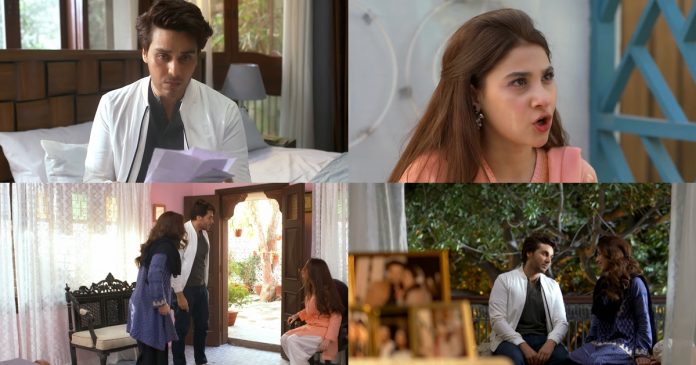 7th Sky entertainment’s another signature project and much loved show Bandhay Ek Dour Se has finally comes to its end. The most electrifying last episode of the drama has just on-aired yesterday. An exceptional tale of love penned down by our most loved ace writer Faiza Iftikhar with superb direction by Ali Faizan. The record-breaking saga is produced by dynamic duo Abdullah Kadwani and Asad Qureshi keeping excellence at its peak, starring Ahsan Khan, Ushna Shah and Hina Altaf in a love triangle. This was the first on-screen appearance of Ahsan and Ushna together.

So the ending of the play was very predictable yet amazingly satisfying, the play ends on a very positive note where Roshni got the taste of her own medicines and all her lies becomes apparent in front of Omar. Omar wholeheartedly returns to Maheen and Maheen got the fruit for her never-ending patience.

Performances were brilliant, Ahsan Khan and Ushna Shah’s chemistry was on-point and the duo looked wonderful together. We would specially like to appreciate Hina Altaf performance where she did complete justice to the character as Roshni. Though the acting was loud, it was integral to the character. The three of them took these characters into reality so much so that you want to protect innocent Maheen and Omar from evil Roshini at any cost.

Infact, each and every character of this drama had so much to offer and most interesting part was those hilarious exchanges of banters and comic twists in the family that the drama never got boring. All the characters in supporting roles including Saba Hameed, Saba Faisal, Samina Ahmed, Qawi Khan, Noor Hassan, Kamran Jilani, Ali Rizvi and Saima Qureshi also contributed equally to the success of the drama, their characters and performances were so complete in their own way and together they gave us Bandhay Ek Dour Se.

All in all, Bandhay Ek Dour Se was a beautiful drama. It spoke about love, hate, relationships, sacrifice, selfishness, thing spinning out of control yet everything came back to its right place. The drama ended up being a story so relatable to general audience because these are the real life situations each of us had come across at certain point in lives.

Of course the credit goes to drama makers where attention was given to every detail, from its magical OST to witty dialogues, from its instrumental background to stellar performances, from superb screen play to realistic locations, from editing work to aesthetic vibes, everything was tremendous. Special bow down for the writer, director, producers and actors who made this show a huge success.

If you haven’t watch the grand last episode of Bandhay Ek Dour se, here is your treat!