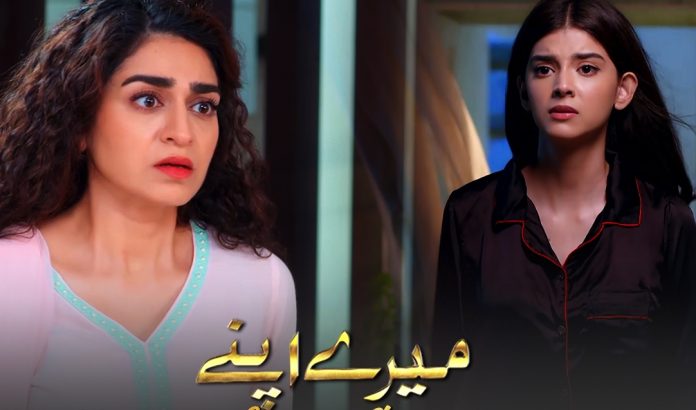 The latest teasers for Mere Apne have made quite the waves over social media. The drama boasts of an ensemble cast that includes Hajra Yamin, Usama Khan, Zainab Shabbir and Ali Abbas in leading roles. Veteran actor Waseem Abbas will also be seen performing alongside his son.

Mere Apne is based around the concept of the ‘watta satta’ custom where families decide to marry off their children with one another. It generally is smooth sailing until one couple starts having issues, this in turn affects the other couple too regardless of any of the partners being at fault. We are yet to see how the story unfolds but the teasers suggest a dramatic plot with a number of twists and turns.

The first teaser shows the wedding of the two couples taking place where the leading ladies question the watta satta custom and whether one can remain happy in such relationships. We are blown away by how gorgeous the two beauties Hajra and Zainab look in bespoke bridal outfits!

The following teaser shows Hajra Yamin sharing how beautiful her life is after marriage and the love she has for her new family who are just as precious to her as her own. This teaser gave us a happy family and positive vibes all over.

Coming to the next teaser we get to know the reality behind such complex relationships. It is not as rosy as it seemed to be and sadly Hajra and Zainab seem to be getting the brunt it. We are intrigued to see how the story will progress. Mere Apne promises a gripping storyline with a rollercoaster ride of emotions.

We are excited to see Ali Abbas and Hajra Yamin create magic on screen together after their successful pairing in Naqabzan. On the other hand Usama Khan and Zainab shabbir share a great chemistry in real life and it will be great to see them channel that chemistry on screen as husband and wife.

Mere Apne is penned down by Quratul Ain and Dilawar Khan and directed by Mohsin Mirza.