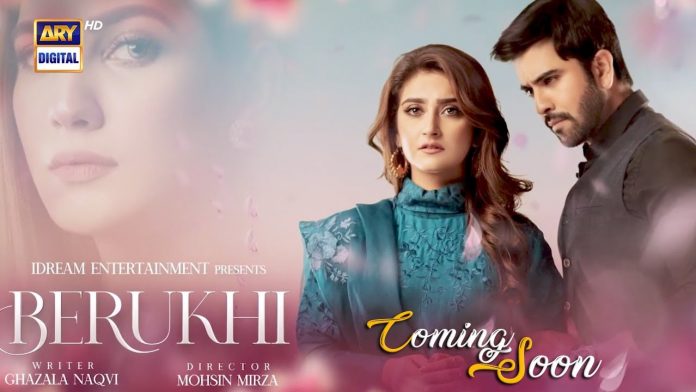 After enthralling audience through Wedding Virus last Eid ul Azha on ARY Digital, Hiba Bukhari is back on our favorite TV channel with Berukhi. Written by Ghazala Naqvi and directed by Mohsin Mirza, this iDream production reunites her with Junaid Khan, her Silsilay co-star after three years. Not only that, the drama also features Nazish Jahangir in an important role, and adding her to the equation gives the drama the ‘triangle’ edge that seems to be in demand these days.

Berukhi seems to be a family drama where Rehan Sheikh, Usman Peerzada, Nida Mumtaz, Iffat Rahim, and Hasan Ahmed join the lead cast to entertain the audience. From the teasers, one can judge that Hiba Bukhari’s character literally resembles that of Cinderella btu that means that her relatives don’t approve of her despite in some way.

Although the teaser doesn’t reveal much, we do get to know that Junaid Khan is her knight in the shining armor and will have to face the music before making her his own. What are the reasons that keep the beautiful Hiba Bukhari away from her beau, and how Nazish Jahangir fits into the story is what makes the viewers wait for the drama.

Berukhi not only seems to have a star cast but also a star director, for Mohsin Mirza’s Log Kia Kahenge was amongst the top dramas last year. How will he weave his magic and use the veteran actors intelligently is one of the many reasons why this play should be on your must-watch list in coming days.