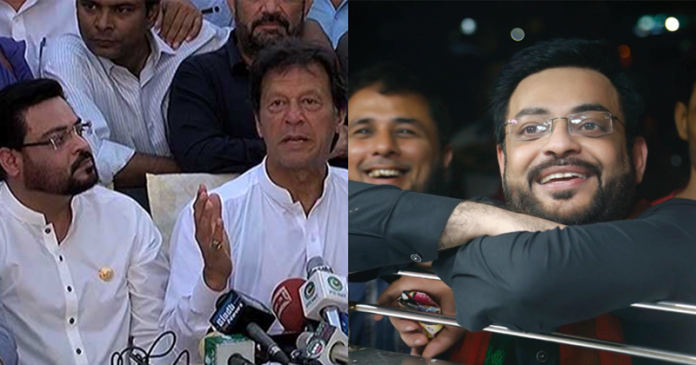 If you are true Desi, you might easily relate to the familial politics and roothay huay Rishtaydars (Upset relatives), even some of them, that you barely know of, complaining of not being invited to your Mehndi.

PTI’s latest position might be above any emotional flops, Shadies and rishtaydaries but where there is Amir Liaqat, there is meant to be some drama. Often known to have switched channels more frequently than someone would like change their T-shirts, the BOL anchor and PTI member Amir Liaqat Hussain seems to be unhappy, accusing negligence of PTI towards Karachi and karachites and also not nominating anyone among party’s elected representatives from Karachi for the seat of speaker and deputy speaker.

Media further sited Amir Liaqat’s tweet just yesterday complaining of not being invited to the ‘supposed’ luncheon at the Governor house. The MNA from NA-245 constituency seemed resentful for not being given any participation- adding more fuel to the fire.

And not just that, Amir Liaqat even left the PTI’s Wattsapp group, like any dignified person would do!

Referring to Amir liaqat’s recent claims of not given minister-ship in the cabinet, the PTI senator Faisal Javed khan called Amir Liaqat to be adventurous by nature and that no one,including himself, has been so blunt to have asked for minister-ship.

If some of us, given Amir liaqat’s past record, might be wondering if he’s leaving PTI…

Well, No. Not for now. But according to Senator faisal, Amir Liaqat should think about the greater good of the country rather than bringing in personal stances, thereby also rejecting the claim that Amir Liaqat won the seat by the accord of his own popularity saying:

“I believe anyone would have won on a PTI ticket in Karachi for people voted for Imran Khan’s ideology. If he thinks its his own vote bank, he should have contested independently.”

Anyhow, PTI has been under hot debate since day one. PM Imran khan took Oath ten days back but the tsunami of expectations and annoyance is sticking like a bubble gum in the party’s hair. Pehlay Reham, ab Amir!

Well, let’s hope for the best!

In Dinon by Atif Aslam is a Super Winner for us