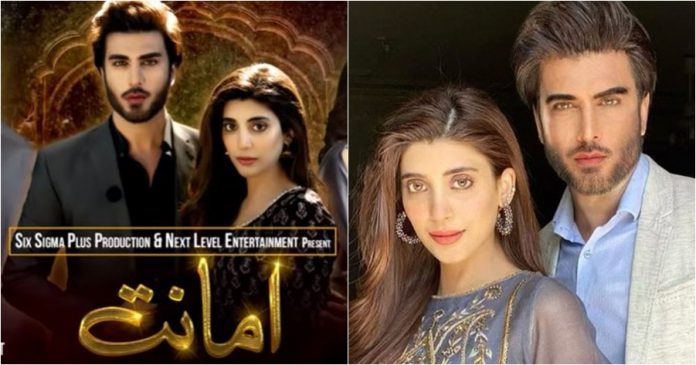 The teasers of ARY Digital’s much-awaited project ‘Amanat’ have hit the internet and are now going viral for all the right reasons.

The ensemble cast of Urwa Hocane, Imran Abbas, Saboor Aly, and Haroon Shahid is one of the major reasons that the drama’s pre-hype is high. And of course, with drama-buffs obsessed with love stories; the distinctive pairing of Urwa and Imran Abbas is generating a massive buzz across social media. So much so, their BTS from the sets became a target of marriage rumors in real life.

Urwa Hocane is grabbing eyeballs as Neeli in ARY Digital’s Neeli Zinda Hai and now she is all set to make a splash in ‘Amanat’. Alongside her, the chocolate-boy Imran Abbas will be dazzling us as he will be pairing up for the first time across Hocane haseena in a romantic love equation.

But from the looks of the teasers, we are sensing an antihero in their love saga.

Seems like it will be Saboor Aly who will be teaming up against the couple in the story, with Haroon Shahid by her side.

The promos show a jubilant Urwa, dressed up as a breath-taking bride while it is Saboor who is dressed up in a back ensemble as if she is in mourning and is all tears on her wedding day. In another teaser, we see Saboor’s character vying to take revenge for her ruined life and holds hand with Haroon to gang up against the duo.

We are anxiously waiting for more teasers and the OST to get to know the real story. The clips released so far have surely made us curious.

The story is penned by Rukhsana Nigar, directed by Shahid Shafaat, and is produced under Next Level Entertainment.