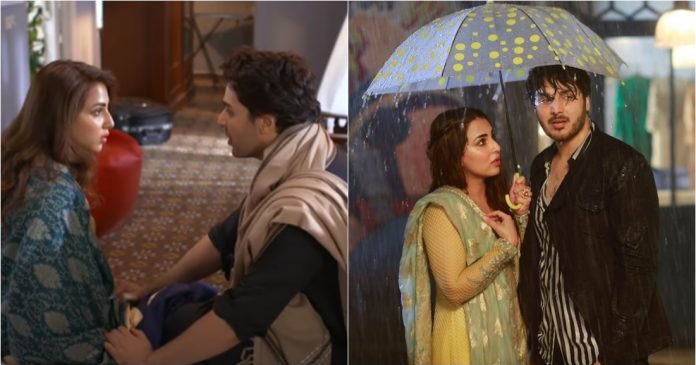 7th Sky Entertainment’s much loved show Bandhay Ek Dour Se is set to bid farewell to its viewers as its second last episode aired yesterday. The drama had an impressive unique storyline with a veteran cast who kept us hooked with their incredible acting skills. Of course, we are going to miss our weekly dose of entertainment and positive messages that this drama is famous for; here are five reasons why… take a look:

Gripping Storyline: Bandhay Ek Dour Se is a not-so-typical love story by ace writer Faiza Iftikhar that mostly falls in the context of a distinctive corny love triangle. The hallmark of the witty dialogues and the amusing exchange of occasional banters tickled the funny bone and altered the realistic love story dynamics.

The Magical OST: The OST of the drama served as a fantastic introduction to the storyline, brilliantly composed by Sahir Ali Bagga coupled with beautiful lyrics and the soulful voice of Hadiqa Kiyani made it even more magical. Even if the drama has come to an end, we are sure the OST would remain on our playlist for a long time.

Family Oriented Drama: Bandhay Ek Dour Se is an entirely family-oriented drama that emphasizes how people live together in a well-knitted joint family. Rivalries and banter against each other exist, but despite disagreements regarding tough circumstances, everyone is there for each other.

Chemistry of Lead Pair: Ahsan Khan and Ushna Shah are already known for their incredible acting skills. Their unmatched chemistry in Bandhay Ek Dour Se has taken up the show to places. Both of them created magic on-screen by beautifully depicting the love story of the characters.

Stellar Performances: While the chemistry of the lead pair was extraordinary, Hina Altaf, who was part of the love triangle, impressed the viewers with her exceptional performance throughout as well. In fact, the other veteran cast, including Saba Hameed, Saba Faisal, Samina Ahmed Qawi Khan, and Noor Hassan, make it a treat to tune in to this drama. They all put their hearts and souls into the characters and won us over with their stunning performances.

All in all, the drama caused us to fall in love with their characters and hate them, so much so that they made them a part of our lives. The credit goes to 7th Sky entertainment, of course, and also to the masterminds Abdullah Kadwani and Asad Qureshi for this blockbuster. We are now anxiously awaiting the last episode. Are you too?