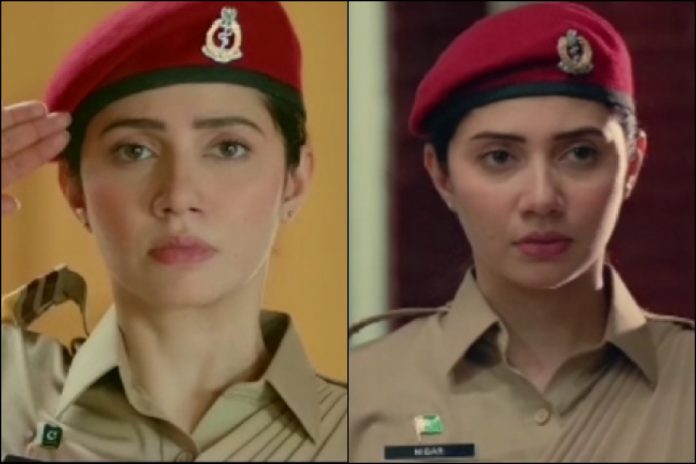 Ever since the news of Mahira Khan starring in an ARY Digital project based on the life of ‘Lieutenant General Nigar Johar broke out, all eyes are on the much-awaited telefilm ‘Aik Hai Nigar’.
It’s not every day that the Pakistan drama industry invests in producing true stories, based on real heroes of Pakistan- especially those who are women. Consequently, it was a proud moment for us when a venture honoring Pakistan Army’s first female Three-star General was announced by ARY.
The crème de la crème team is behind the telefilm. With Umera Ahmed’s golden pen writing the script, Mahira Khan in the lead, and Adnan Sarwar of the Motorcycle Girl fame directing the telefilm, Aik Hai NIgar is bound to break all viewing and rating records.
The second teaser has raised the hype and hoopla around the project all the more. Riding high on women empowerment and enunciating General Nigar’s vision of being a role model for the female strata of the country, the promo made our hearts swell with pride for the women in uniform.
https://www.youtube.com/watch?v=m4MPTWAw9zA
Whats’ more, Mahira Khan has never looked more beautiful in a no make-up look, hair tied in a sleek bun, while donning the army’s saree uniform and cap. She appears genuine, dignified, and natural- exactly like General Nigar’s personality appears to be.
The telefilm’s release date is still a mystery. However, it will give us an ultimate peep into the life of General Nigar, her career, the challenges she faced being an army woman and rising to the top in a sphere dominated by men. Dedicating her life to the field of medicine, Johar is a bright surgeon and is also Pakistan’s first female surgeon general.
Super excited for this one-of-its-kind project! It will be that one telefilm that will bring awareness about a country’s revered female hero to viewers of every age- something that is much needed to inspire audiences in times when women empowerment is highly threatened.