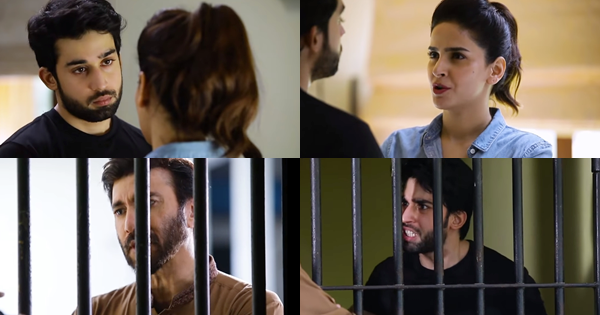 Cheekh is definitely not another low end family drama that revolves around couples or family issue. It is a drama with a different theme and the story line is absolutely unique in nature, one of the best Big Bang Entertainment projects to air on ARY Digital. The two lead roles Bilal Abbas Khan as Wajih and Saba Qamar as Mannat, are not the clichéd couples, rather they play the lead roles as devar and bhabhi which makes the fight between them very interesting to see.

Episode 11 took the turn we all wanted to see in the drama.

The episode opens up with Mannat bidding farewell to her in laws, as she leaves Pakistan to be with her husband. She is scared and for her the only option remains is to run away from this matter even though deep down inside, her heart still pains for Nayab’s justice.

As Mannat sits in the car, Wajih comes over and tells her to pray for Ramazan chacha. These words hit Mannat and as her car drives towards the airport, the words keep haunting her. She takes one final turn towards Nayab’s house before she can finally leave the country and put all this behind her.

At Nayab’s house she finds out that the police have taken Ramazan chacha without any reason.

And this becomes the final trigger to Mannat’s decision of fighting back. She asks the driver to take her to the police station where she not only releases Ramazan chacha but also files a complaint against Wajih.

A proud, satisfied and confident Mannat returns back home.

This specific scene could potentially be the juicy highlight of the entire drama where Wajih is going off to meet his friends, happy that he succeeded in scaring Mannat but as soon as he sees Mannat come back, his smile disappears. 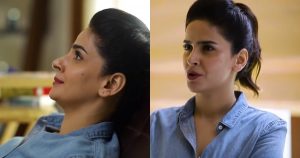 What made this scene the highlight of the drama was the brilliant acting performance by Mannat and Wajih and the way they both carried their character with their dialogues as well as body language.

Now we see Mannat who isn’t scared of anyone and Wajih who is scared and confused at Mannat’s confidence.

We have seen many stars perform jail scenes and go insane inside the cell but Bilal Abbas Khan has to be the cutest and most amazing star who simply nails the jail scene with true perfection. 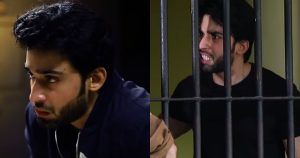 After only a few minutes of Mannat reaching home, Police arrest Wajih and put him behind the bars. Yawer tries his best to bail him out and protect his little brother but due to a strike, Wajih is let to stay in the jail for 2 days

This is where we see Bilal Abbas Khan in his best jail scene performance. From going restless because of the smell to raging anger because he has never imagined being in such a situation, Bilal Abbas Khan’s performance as Wajih made the scene very believable. The dialogue delivery, the body language and the eye rolls were simply spot on.

The episode ends with Mannat fighting against all the odds to seek justice for Nayab but it becomes even more difficult when Shayan comes home and both Yawer and Wajih brain wash him into thinking Mannat had an affair with Haya’s fiancé.

Shayan is now under the pretext that Mannat is revenging on Wajih for knowing about her affair. Will Mannat be able to gain Shayan’s trust or will she find herself helpless and homeless? Keep watching.

Social Media Woos Over the Phenomenal Performance of Ramsha Khan in...