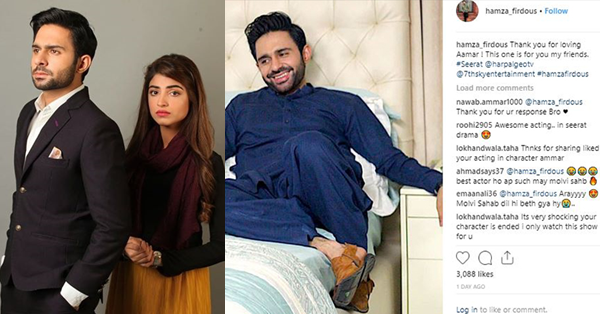 Drama serial “Seerat” has kept us on our toes, ever since it got aired on Geo Entertainment. One after another twist in the story kept the content interesting and thus managed to hook up the audience.

Just when we thought everything is finally going in the right direction and the serial is gradually moving towards a light and a happily-ever-after kind of ending, Seerat approaches a major twist. With the untimely and extremely unexpected death of Aamar, a character played by an accomplished actor Hamza Firdous, we are left wondering about the various possibilities the serial would now move forward with.

Hamza Firdous as Aamar portrays a practicing Muslim; a polite, humble, true to his word kind of person whose character has a very positive impact on people, with particular emphasis on Maria (Kinza Hashmi) who is inspired by Hamza’s character to such an extent that she ends up following the path he chose for himself. 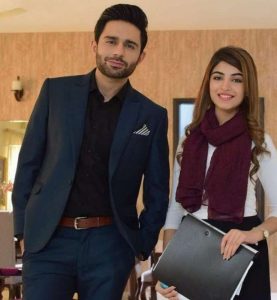 However, on the night of Aamar’s marriage to Maria, he gets shot by a group of bad guys in an attempt to rescue his cousin (Ali Ansari). Aamar dies there and then, however his character lives with us through Hamza’s remarkable acting which managed the execution of an inspiring content.

It is not the first time Hamza Firdous, son of the veteran actor Firdous Jamal, has won our hearts through raw talent. Having played roles as diverse as that of crazy Tipu in Oh Rung Reza to a compassionate Hindu Tek Chand in a period play Ghughi, Hamza made sure he executed each to perfection.

As much as we praise an actor for his brilliant performance, it must never be ignored that performance of any actor is directly proportional to the quality of the content he is working at producing. Aamar managed to win our hearts not only because of Hamza’s superb acting, but also because the serial has a story line which is not so typical. It has been written with a certain sensitivity towards the topic while not being your usual romance-based-and-forced-masala like drama. It has stood steadfast against the test of time while snagging brilliant ratings throughout, despite being unavailable on the largest web portal, YouTube.

While we all silently wishe Aamar could have lived to witness a beautiful life with Maria, end of Hamza’s role in Seerat will however witness his re-incarnation in another drama serial “Bin Badal Barsat”, promising yet another diverse role to the audience. Moreover, we would be seeing him perform the lead role in a film “Aashiq”, as well as in the direction of crime thriller based web series “Chaal”.

Mr. “Axcuse Me Aap Bhi” reveals the secret to “laali on...