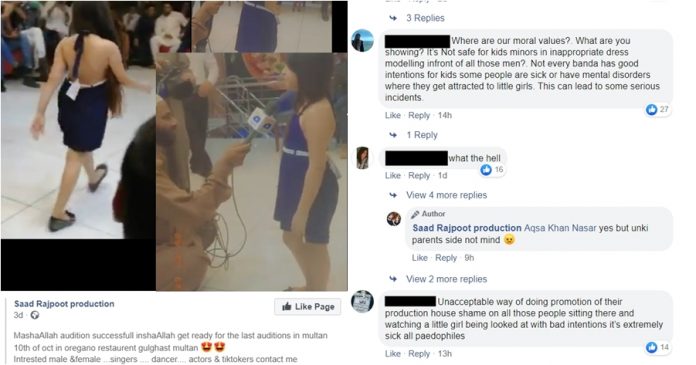 A video is going viral on Facebook and people found it disturbing for so many reasons .

An underground talent agency from Punjab, Pakistan with name of ” Saad Rajput Productions ” organized a talent hunt and they posted videos of post-event in which a very young pre-teen girl walking in the middle of dozen of adult males wearing backless short skirt and posing like an adult girl.

If it was an event for same age group then her outfit and poses were not objectionable, but the crowd was full of adult males and the way they were staring at the little girl, seems disturbing for so many reasons .

A News TV reporter also can be seen interviewing young girl in the video and it seems like this is acceptable for Media outlets .

However, People are speaking against the sexualization of young girl on social media and criticizing talented agency for organizing such event for their own promotions and using young girls .

Some people raised question about parents of the girl , who tolerated this uncomfortable situation for their daughter.

Actor Syed Jibran also shared the post and expresses his anger and found it very disturbing .

The Facebook page of the talent agency has only few hundreds likes but the post has triggered a massive audience and people are showing their displeasure .

Almost every person is asking a question ” How could parents encourage their child to do this and how they tolerated this disturbing situation ? ”

These talent agencies and such underground talent shows should be strictly monitored and authorities should prevent any kind of child sexualization in such talent expos .

Paranormal Activity Caught In The CCTV of a School and goes...