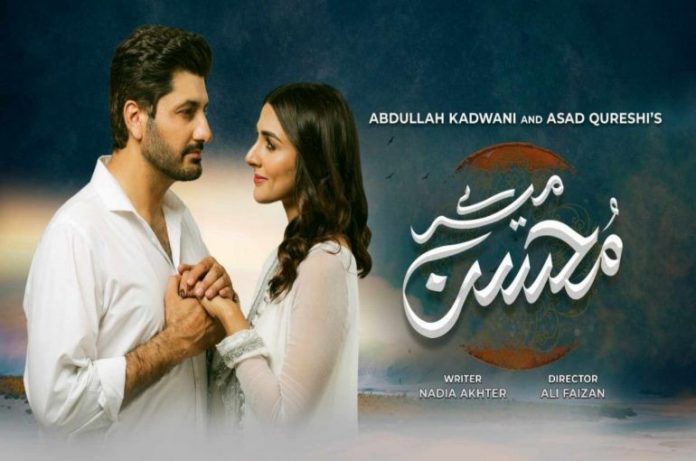 A presentation of 7th Sky Entertainment, the well-paced drama serial Meray Mohsin has reached its 8th episode showing some progress in Mohsin and Soha’s emotional journey together. Meray Mohsin is a story of two lovers belonging to different backgrounds, for whom their family struggles and commitments become a hurdle in their efforts to spend a life together.

While Mohsin’s mother feels strongly about finding the ideal life partners for her children, she also manages to infuriate her son when she tells Mohsin that she will never budge from her requirement of getting a daughter-in-law from the same caste and creed as them.

The latest episode brought the most crucial twist in the story, where a frustrated Mohsin decides to marry Soha in secret. The decision has been rash and hasn’t been thought-out well, since neither of them consider the consequences of making this move without the consent of their parents. They both have now found themselves in a mesh of problems, with no way out.

Meray Mohsin is a storyline that is steadily progressing, while keeping the audience interested. The idea behind the drama’s script is very relatable and many people from the audience would be able to find their own stories in it – which makes it quite impressive.

Rabab Hashim, playing the role of an arrogant daughter has added new diversity to her portfolio with Soha’s character. She perfectly displays the psychological impact of abandonment on a girl who has been doted upon all her life.

The question now arises: What kind of trials are awaiting these lovebirds in the future? Stay tuned for the next episode of Meray Mohsin to see what is to become of Soha and Mohsin.