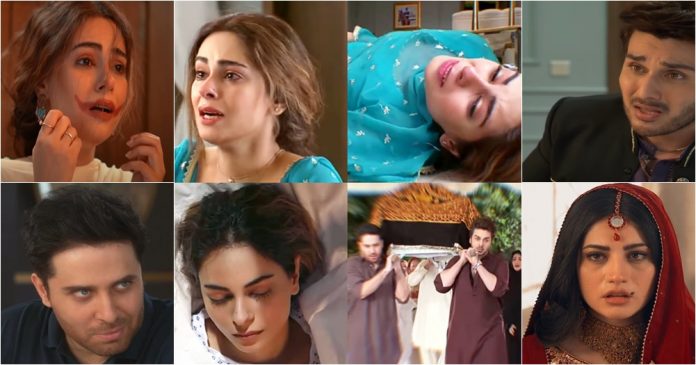 7th Sky Entertainment’s ‘Qayamat’ is the drama on everyone’s mouth these days. It can be safely said, without a speck of doubt, that the character Samra, flawlessly delivered by the talented and skillful, Amar Khan, left a wandering ache in the hearts of the viewers of the drama each time she was faced with an injustice. That wandering ache turned into something more solid after Samra lost her life due to her husbands carelessness, more earlier than we had imagined.

This is how the tragic end of Samra played out:

Just when Samra has finally started receiving a little consideration from Rashid, commendably played by Ahsan Khan, he gets a call from his past lover, his mistress in fact, Pari. Pari evidently only calls him for money, but he once more falls prey to her sugarcoated, poisonous words and starts to make way to go to her. Despite Samra pleading after him, telling him to stay for his brothers mehendi event, and telling him that if he went to Pari, it would be the end of their marriage and that this was the least he could do for his baby, he pushes her off of himself very rashly and she falls on the ground, straight on her stomach. Her excruciating screams and cries could be heard by anyone, but as usual, the one person that was deaf to her pain, was her own husband, Rashid. At being rushed to the hospital, Samra is straight taken to the labour room  where she gives life to her baby girl, whereas she loses her own life in the process because of the excessive blood loss. Rashid on the other hand, is busy fighting with Pari’s lover who takes a gun out on him. In the middle of a physical struggle, Rashid ends up accidentally shooting Pari with the gun. Fast forward to Samra’s funeral, Rashid’s father finds a way to get Rashid out of jail and Jawad brings Rashid home, where he discovers that his wife has passed away and he now has a daughter. The guilt and regret in Rashid’s eyes is evident but will this be able to change him?

The innocent, angelic, sacrificing and heart-felt Samra, is no doubt the kind of character who’s life and death will definitely have a toll on the life of the other characters. Samra’s death is a fork in the road for almost all the characters, a turning point in their lives, and specially Ifrah’s. Her death does not only leave an aching, vacant space in the hearts of the viewers, but also arises many questions in their minds. What will become of Jawad and Ifrah’s wedding? Will Rashid be able to raise his daughter, with such a tainted track-record? Will he finally change? After finding out the truth about what really caused Samra’s death, how will Ifrah react? Keep watching this mind-blowing, block-buster 7th Sky Entertainment production to find out!