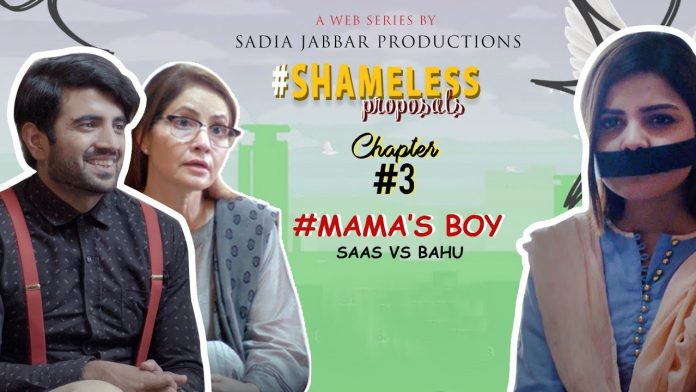 Sadia Jabbar Productions’ newest venture in the digital world – the hilarious, yet thought provoking web series Shameless Proposals speaks the universal satirical language to communicate brutal societal traditions. Getting a rishta is no pleasant business in Pakistan, but Shameless Proposals has really been making the whole ordeal a lot more hilarious to think about; a not-so-subtle jab at the toxic desi rishta culture is enough to lift up our moods, and might eventually bring a much needed change.
This week’s episode was the stuff of every girl’s nightmare – getting rishta from a typical mama’s boy. As the girl gets ready to meet her suitor, she is shown to wear the traditional jewelry adorned on girl – a rag around her mouth to keep it shut!
Isha Noor has done a tremendous job in channeling every girl in a similar state, as she sits angrily throughout the painfully disturbing exchange, and eventually takes the rag off her mouth to give the boy and his mother a reality check.
As for the mama’s boy, the script has managed to encompass all the nightmarish traits in a span of a few minutes. As he rambles on about his demands from the girl, he quite dramatically and accurately portrays someone you’d run into quite a lot. He sits between his controlling mother and submissive father, making it quite clear that his world revolves around keeping his mother happy, and he expects his potential partner to do the same.
Shameless Proposals has yet again outdone itself with its over the top satire, as it raises the real question about where women, the kind who didn’t actually give birth to you, fit into the world of a mama’s boy? When will mothers stop encouraging this behavior, and let their sons live their lives with their partners without their interference? As the angry girl loses her cool and uses some very colorful language to call out this messed up behavior, we can’t help but feel a little pride in her courage to do so, hoping that somehow this can happen in the real world as well. by Yusra Waheed

You Can watch Episode Here: