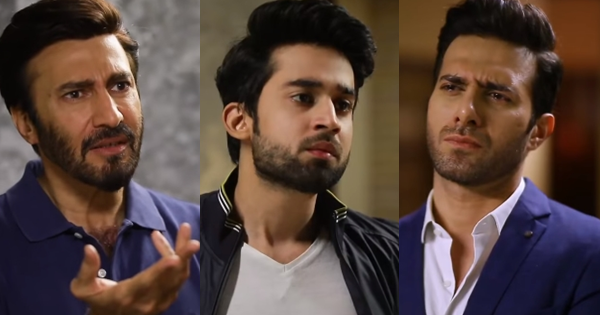 Since the first episode of Big Bang Entertainment’s Cheekh was aired, it has mesmerized the viewers and raised the bar for all the other dramas with its intense and mind blowing scenes and direction. The drama has proven that our entertainment industry is one of the strongest in the world, with so much of talent hidden in it. Every week, the fans of the drama eagerly wait for their favourite characters to create magic on their TV screens, and this week was no different, when the creators of Cheekh presented us with another edgy episode.
This week’s episode starts with a court scene where Wajih, Shayan, Mannat and Yawar come face to face in a very intense situation. Although none of these characters have any dialogues throughout the scene, their facial expressions and body language are enough to determine their thoughts. Shayan is trying his best to stand behind Manat and protect her from his family, while Wajih on the other hand, is still unwilling to give up and takes to social media to defame Mannat.
While every scene was vigorous for the audience, the most powerful scene of this week’s episode is when the three brothers come face to face with each other. It seems like a face-off between evil and good. Aijaz Aslam, Bilal Abbas Khan and Emmad Irfani have perfectly displayed the tension between the three of them.
While talking about the story and character development of the drama, the acting skills of the entire cast should be taken into account. Saba Qamar’s portrayal of Mannat is absolutely spot on and brilliant. There must be so many people who were waiting for a strong character like Mannat or who must see her as a saviour. In this respect, Saba Qamar has played a part for the greater good. Meanwhile, it is obvious that Bilal Abbas Khan has put his heart and soul into Wajih’s character, because the way he brings out the creepiness in Wajih’s expressions is laudable. Because of Bilal Abbas Khan’s impressive acting skills in a negative role, it becomes quite easy to hate Wajih. Emmad Irfani and Aijaz Aslam are equally phenomenal as actors here. It has been a long time since a character like Shayan has appeared in any drama, as it has a bit of complexity to it and Emmad Irfani has portrayed it with ease. This week’s episode included one scene with another interesting character played by Shabbir Jan, whose persona and charisma left a mark, keeping the audience glued to their seats.
Cheekh is a brilliant addition to our incredible drama industry, thanks to the team of Big Bang Entertainment. We have an amazing content here and have the full potential to get recognised internationally. Here’s to hoping we can reach the masses all over the world with this amazing work of art.
By Mehak Zahra

Muqaddar follows a unique tale of the struggle and survival of...