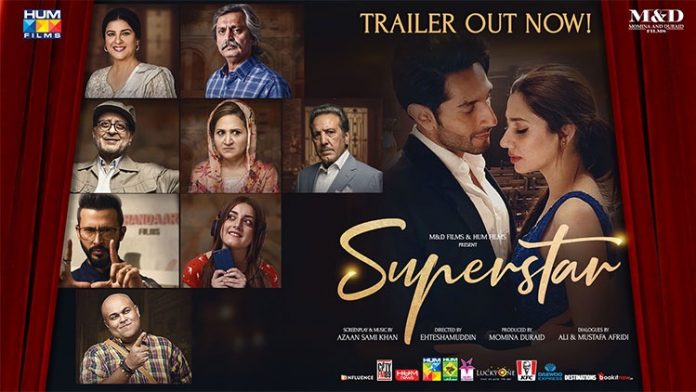 Judging from the elegant posters and the top notch casting of Mahira Khan and pairing her with Bilal Ashraf, the audience wondered what our super producer Momina Duraid was going for. Then came the super supporting cast along with the cameos.

Our expectations went high as we waited to see something visually. It wasn’t too long when Bekaraan song was released and for the first time we saw a certain chemistry of stars which had been missing from our screens. The next thing which kept our hopes high was none other than the trailer.

And alas last night the trailer launch happened – the trailer was witnessed, and we have to say, out of all films coming this eid, superstar has gone miles ahead.

The trailer which showcases the world of stardom, a girl Noori (Mahira Khan) longing for the world of show business is star struck when she gets the chance to work with the ultimate hunk and hero of the industry Sameer Khan (Bilal Ashraf). The romance sparks instantaneously and the connection between our pair is a 100/100. Bilal looks spectacular in his character.

The twists and turns are highlighted as stardom comes at a price when we witness Mahira’s character take a leap up while Bilal’s character tumbles down. The intensity and emotions are strong and the acting brilliant. The framing and execution thanks to Ehteshamuddin has been nothing less than flawless.

The songs are catchy and the sets looks are nothing short of brilliance. Momina Duraid after Bin Roye, Parwaaz Hai Junoon is out there to prove to her audiences that this Eid ul Adha everyone witnessing Superstar will have the time of their life with a ultimate paisa vasool entertainment.

A beautiful piece of cinematic art!

Muqaddar Keeps us Hooked with some interesting developments and rocky new...