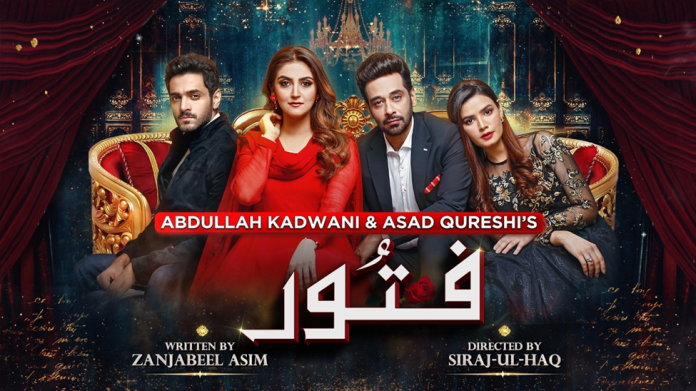 7th Sky Entertainment’s new drama serial “Fitoor” has become the latest talk of the town. The reason being pretty obvious, the astounding team behind it; top of which are masterminds and backbone of 7th Sky Entertainment – Abdullah Kadwani and Asad Qureshi, the director extraordinaire Siraj-ul-Haq and seasoned writer Zanjabeel Asim.

The drama gained hyped even before its premier in January 2021 and got the audience and critics attention alike as soon as its first episode on-aired. The lead couple is being played by the very talented Faysal Qureshi and Hiba Bukhari and other prominent cast includes Wahaj Ali and Kiran Haq. The ensemble cast compliments the storyline beautifully.

Fitoor is a breath of fresh air amongst the usual dramas, as it centers on a young architect named Saif and a beautiful young lady named Dilnasheen. Despite reaching unprecedented heights in his profession, Saif is haunted by recollections of a prior relationship. Dilnasheen comes from a middle-class family and has feelings for Hamza, her best friend’s brother. Dilnasheen and Saif’s paths cross each other only to find themselves in an unexpected and somewhat uncomfortable situation.

If we take a look at the recent turn of events, Fitoor is now at an important stage as Mehmil reveals about Dilnasheen’s past relationship with Hamza to Haider in the latest episode.

On the other hand, Dilnasheen’s mother overhears her conversation with Rida in which she is trying to clarify her position and misinterprets it. Instead of trying to understand her point, she chooses not to listen to Dilnasheen and simply blames her for being disloyal to her husband to her new relationship.

After these recent developments and after finding out from Rida that Hamza has become addicted to drugs, fans are now anxiously waiting for Hamza’s return in the picture.

The lifelike characters of the drama are quite relatable. The stellar performances by everyone have made the show equally impressive. Both Hiba Bukhari and Faysal Qureshi are known for their effortless natural acting .And of course Wahaj Ali’s incredible acting prowess that has surely made an impression on all!

Fitoor has earned tremendous fandom with each episode on-air, thanks to its gorgeous cinematography and impactful dialogues, captivating storyline, and likeable characters. With roughly 15-16 more episodes to go, each adding more fuel to the fire, Fitoor is poised to establish unbreakable records for highest TRPs by the time its finale airs.