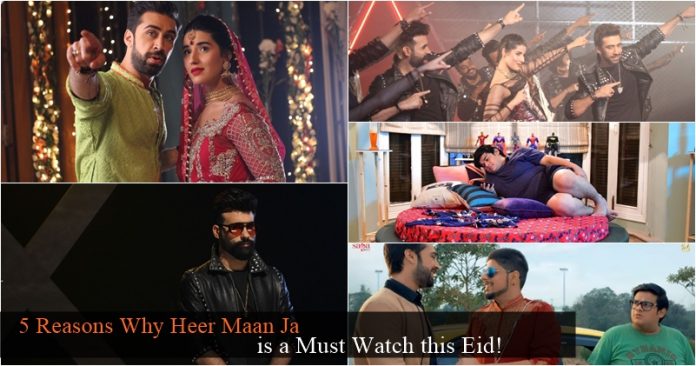 So Heer Maan Ja and their team have been all over the internet since the past many weeks now and we couldn’t help but feel excited for its release and see what the movie has got for us – and it’s safe to say we weren’t disappointed!

Last night when the filmmakers decided to do a special screening before the movie premiered officially, the massive appreciation and applause the movie received all over the internet was overpowering! So much that the movie has already been trending even before it officially hit the big screens.

However, we finally got to see it tonight, and oh wow, what a masterpiece this film is! Worth every bit of hype and anticipation. IRK Films and Arif Lakhani Films have just brought forth their best work so far and we can’t stop gushing over it.

The movie is a must watch this Eid, and here’s why:

The one thing we couldn’t wait to see was Hareem Farooq and Ali Rehman Khan on the big screen together again. The two have that kind of attractive chemistry that is the most endearing to watch, and while this was the first time we saw them in a romantic setting, it didn’t disappoint AT ALL! In the middle of all the confusion, the laughs, the lovey-dovey stolen glances, the tears and the arguments, you find yourself completely entranced by the Heer-Kabeer combo. Fair warning: It might be difficult to come out of that trance anytime soon!

In an interview Faizan Sheikh commented that people are mostly used to seeing him in a comic role, and they might be surprised when they see Wajdaan, the spoiled, arrogant antagonist in Heer Maan Ja. And he wasn’t wrong! They say that it’s risky for an actor to play the role of a villain, for he might always be looked at in a negative way, but Faizan Sheikh might have completely proved it wrong. Yes, you wouldn’t like Wajdaan, but you’ll definitely find so many Wajdaans around you, he is that relatable! Also, Faizan Sheikh in those fight sequences – worth raving about!

I mean, come on, Addi Maar is already on repeat somewhere in my mind since the day it was released! But to be honest, the fact that they’ve covered a variety of musical genres in Heer Maan Ja is surely worth noticing and appreciating. You want to dance? Addi Maar is your go-to option. You want to think of your beloved and all your nice memories together? Kuch to Hua Hai is your answer. Just went through a break up and want something slow and sad to match your mood? Listen to Chan Mahi!

4- Jerry – the man who has won hearts already

There’s always one side-kick in every movie who you end up liking a lot more than you expected. And that’s Jerry for you! The person in Heer Maan Ja who makes everyone laugh and wants the world to be a big happy place for everyone – Jerry’s character, played by Mojiz Hasan is fun to watch.

This guy needs to be mentioned for sure! This is Shumayale Khattak’s first time on the big screen. He’s a new introduction to the industry by IRK Films, and he has most definitely not disappointed at all with his performance. Ramsey is one of those characters that you would see everywhere around you – people who think they know it all, but they really don’t. Instead, they annoy you the core! But Ramsey would make you laugh for sure, and it would become difficult for you to hate him for who he is.

There is so much more to this film that makes it worth watching. The music, the romance, the thrill, the action sequences, the subtle message addressing social issues, the production quality and visual appeal – all add so much value to Heer Maan Ja as a movie. This is a blockbuster in the making!