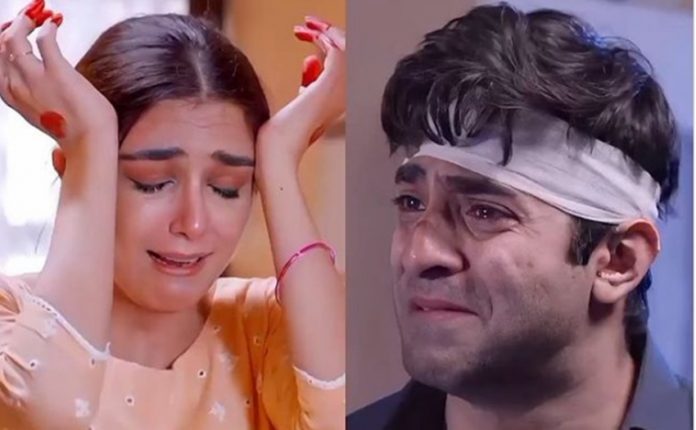 Fans of the cupid struck couple have been anxiously waiting for Rakhshi and Aslam to come face to face for the longest time, however did we want them to meet during such heart-wrenching circumstances? Not really what we predicted, Pehli Si Muhabat’s plot thickens after Aslam has refused to marry Rakhshi saying he hates her and holds her responsible for his dear sisters death. Akram tells Aslam about the message Faizullah has sent for him to go and marry Rakhshi as soon as possible, however Aslam clearly refuses to do so.

Rabia Butt’s Nargis tries to convince Rakhshi to stand up for herself and refuse to marry the widower Asif, Rakhshi has given up and says she does not wish to say anything to her father since she has no right over her life. Instead, Rakhshi asks her father for permission to go to Aslam’s place to pay her respects to Zainab.

A lost in thought Sikander spends all his days and nights in the cemetery sitting next to Zainab’s grave asking for her forgiveness. Aslam, Akram and Murad find him present at the graveyard in the morning and they are enraged to see him there. The encounter between Murad and Sikander was thunderous and Murad had nothing but pity for his existence!

Sheheryar Munavar dominated the episode, Aslam’s scenes with his elder brother Akram were nothing short of phenomenal, while Aslam blamed Akram for having a hand in Zainab’s death, the regret and pain in Akram’s eyes were clearly visible and heart-breaking to watch. Aslam’s next encounter was with Salim Meraj’s Sikander, Aslams confrontation with him was just what he needed to get out of his system and to let the frustration out. However, Aslam’s final scene in the episode with Rakhshi took the cake and we couldn’t believe the hatred he had for her while he spoke to her, it was a relief to see his mother take her side and tried to school Aslam but was this the sad end of the epic lovestory we had been looking forward to all this time? We’re hoping Aslam will change his mind and realise Rakhshi has suffered just as much as he has.

Maya Ali and Sheheryar Munavar are finally sizzling on screen together!

Rakhshi and Aslam’s fiery confrontation was a treat for sore eyes. Maya Ali and Sheheryar Munavar have not shared any on-screen scenes together and we’ve been missing their sizzling chemistry! Even when the duo was hating each other, one could see the sparks fly! Here’s to hoping we get to witness a happy end to this heart-shattering love story.

Will Aslam change his mind or will he lose Rakhshi for a second time? Watch Pehli si muhabat on ARY Digital at 8PM every Saturday.

Digital Era is Revolutionizing the Entertainment world, but where is Pakistan’s...

The Resham-Reham fued will leave you confused forever