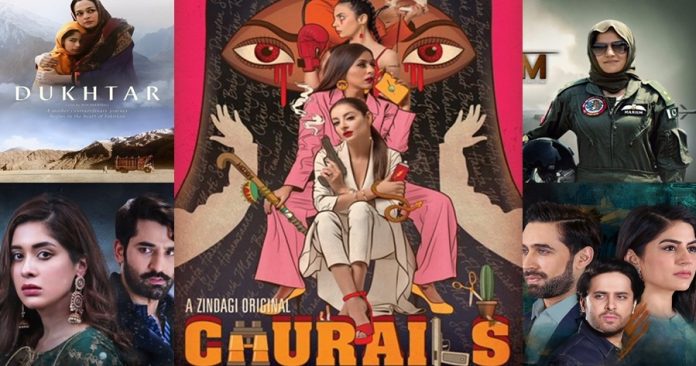 With growing empowerment for women, and the need for equal rights, not only politically but also in several other social environments like households and peer groups, this years Women’s Day should be made special, and what’s more special than watching a show, movie or drama that aims to uplift and empower simultaneously?

To make the most out of this Women’s Day, we have compiled a list of 5 absolutely must-watch movies that are a complete package of tear-jerkers, heart-felt laughter and emotionally stimulating storyline’s and visuals:

This 10-episode series is probably the most worthy to be a part of this list. A group of 4 women from completely different and diverse backgrounds, come together to start their own secret detective agency called Churails. This series is truly a piece of revolutionary art, with its groundbreaking storyline and how it breaks free from socially constructed stereotypes, portraying women in a newfound light and powerful position and outlook.

Another mind-blowing Pakistani production that promoted women empowerment was Hum TV’s Malaal-e-Yaar. The protagonist of the drama, Hooriya, was a strong-willed and ambitious girl that had a character so powerful that she managed to alter the mindset of the entire household that she got married into, including her once, very conservative and patriarchal husband. Not only did she manage to make place in her in laws and husband’s heart, but also firmly believed in the rights of women, and urged others to think from that perspective too.

This heart-wrenching Afia Nathaniel movie is a tale of a powerful woman played by Samiya Mumtaz, a mother that goes out of her way to break free from the shackles that were about to be tied around her innocent daughters ankles, a forced marriage to a man more than twice her age. The depiction of a powerful mother is one that would bring tears to anyone’s eyes. An absolute must-watch.

‘Ek Thi Mairum’ is a Pakistani Biographical tele-film based on the life of the first and only Pakistani female fighter pilot, Marium Mukhtar, who tragically looses her life. Sanam Baloch’s acting is nothing less than brilliant in this master-piece film, it is truly a worthy tribute to a legend and powerful woman like Marium Mukhtar.

‘Khaas’ is another outstanding production that aired on Hum TV. It is a tale of a talented and smart young woman that gets married to a self-absorbed, narcissistic and egocentric man. The story of the drama is about how she finds someone else who teaches her how to put herself first and give importance to her talent and ambitions. She later on becomes so independent and strong that she realizes she needs no one except her own self to find happiness in life.

These 5 productions should be on your watch-list this Women’s Day or else you are truly missing out on the true essence of feminism and women empowerment. Let’s awaken a beautiful feeling of aspiration within ourselves to reach our goals and formulate new ambitions without fear of our gender!