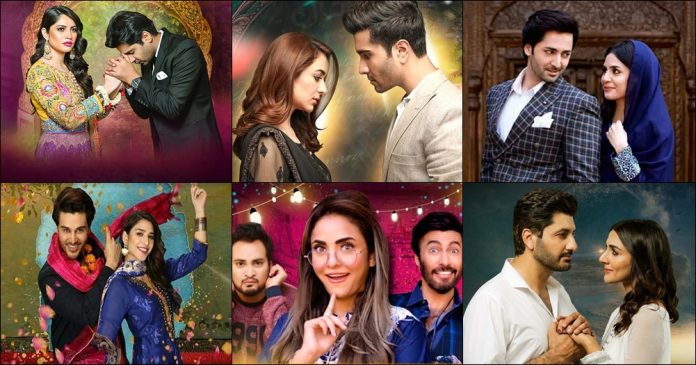 The year 2019 is drawing to a close, but it will be cherished forever, for it has set a new benchmark for our entertainment industry. This year we saw some of the best plays, which also managed to impress the international audiences, raising the bar of our local drama industry. Unsurprisingly, the world of scenes was ruled by 7th Sky Entertainment, under the iconic production maestros Abdullah Kadwani and Asad Qureshi.

Let’s take you down the memory lane to look back to some of the most stellar and hit dramas of the year.

The first drama of the year that went on air in January was Dil Kya Karay. A come back Mehreen Jabbar project, DKK was a love story featuring Feroze Khan and Yumna Zaidi in lead roles. The drama also highlighted essential issues and taboos deeply rooted in our society.

Moving on, with Mera Rab Waris, the viewers saw a different kind of love story, highlighting the ordeals of a Hijabi girl getting married into a liberal and modern family. Starring the versatile Danish Taimoor and Madiha Imam in the lead, it was an eye-opening and thought-provoking play, highlighting the struggles of a modern-day Hijabi woman.

In May, we saw the most gut-busting ‘sitcom of the year’ Dolly Darling, which was the much needed comic relief for the viewers after a long and tiring week. Full of funny and entertaining characters and dialogues, the sitcom is a joyous ride for viewers. Scripted by Dr. Younis Butt, the sitcom stars Nadia Khan, Aijaz Aslam, Uroosa Siddiqui, and Ali Rizvi.

June saw some of the biggest stories of the year. Mere Mohsin, an intense and relatable family drama, was brought to us in June while Bharosa Pyar Tera also aired its first episode in June. While Mere Mohsin was a modern-day love story with the rich girl meets poor boy dynamics, the latter was all about true love, family ties, and sincerity in relationships

Another eye-opening drama Darr Khuda Se released in June, which talked about sexual harassment at workplaces and its impact on the lives of working women. The show is currently on air and has been continuously garnering great feedback from the viewers. June also brought another romantic and emotional serial Piya Naam Ka Diya, portraying the struggles of a girl striving to win over her husband’s heart. As a relief among a heap of all these intense stories,

Shahrukh Ki Saaliyan brought its dose of laughter for comedy lovers. Still, on-air, the comedy show refreshes viewers with its treatment of entertaining and quality comedy dialogues and characters.

With high quality and scenic production, Ramz-e-Ishq, 7th Sky Entertainment graced viewers with a visually appealing show, based on years-old feud of a contemporary Nawab household.

Towards the end of the year, the most anticipated plays Dil-e-Gumshuda and Kahin Deep Jalay, made it to our screens. The first one was a very relatable soap opera, revolving around two poles apart cousins Alizay Jamal and Zara Kamal. In no time, the drama became the talk of the town, becoming one of the top-rated plays of the year with phenomenal success.

Kahin Deep Jalay is currently on air and is a sweet and subtle story of sibling bonding and how it all ruins when an outsider enters the house.

7th Sky Entertainment will now be ending the year with the much-awaited Deewangi, starring Danish Taimoor and Hiba Bukhari. With the drama all set to go on air from 18th December, viewers are excited to witness a gripping love story between an ordinary girl and a soon-to-be-politician.

While bidding farewell to 2019, let’s take a moment to thank the masterminds behind these gripping shows- Abdullah Kadwani and Asad Qureshi. Looking forward to more quality content in 2020!